Music / All That Remains 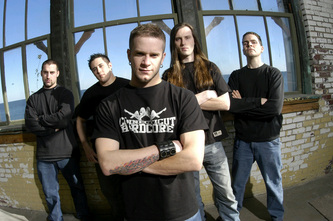 All That Remains is an American Heavy Metal band from Springfield, Massachusetts, which formed in 1998. The band consists of guitarists Jason Richardson and Mike Martin, vocalist Philip Labonte, bassist Matt Deis, and former Diecast drummer Jason Costa. To date, all of their songs that were released as singles have had music videos created for them.

Tropes that apply to All That Remains: