Music / Get a Grip 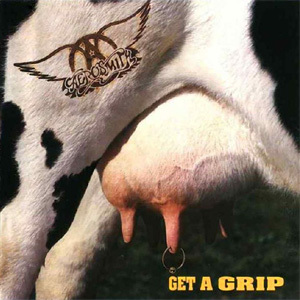 Got to get a grip
Skin and bones, it ain't such a pity
Disclaimer No cows were harmed in the making of this album cover.
Tell me what you think about your sit-u-a-tion
Complication - aggravation
Is getting to you
If chicken little tells you that the sky is falling
Even if it was, would you still come crawling back again?
I bet you would my friend
Again and again and again and again

Something right with the world today
And everybody knows it's wrong
But we can tell 'em no or we could let it go
But I'd would rather be a hanging on
—"Livin' on the Edge"
Advertisement:

Get a Grip is the eleventh studio album by the rock band Aerosmith. It was released through Geffen Records on April 20, 1993.

After a break following Pump, the band returned to the studio in 1992 to record a follow-up. Record executives initially bemoaned a lack of radio-friendly tracks, so they recorded a few more songs later in the year, reaching out to some collaborators for some more songs.

Several of the songs, including the title track "Get a Grip" and "Amazing", deal with the band's past of drug abuse, and coming to a crossroads on dealing with addiction. They also produced several love ballads with their own twist of dysfunctional relationships, such as "Cryin'" and "Crazy".

The album was released to generally positive reviews. Robert Christgau of The Village Voice hailed it as their best album since Rocks. Mark Coleman of Rolling Stone, however, chided what he felt as a generally somber and unadventurous feeling to the album; he felt "Livin' on the Edge" sounded too much like Bon Jovi, and that the outside influence generally dragged the album down.

But Get a Grip was the first Aerosmith album to hit #1 on the Billboard 200 album chart, and would ultimately go seven-times platinum in the United States. At a total of 20 million copies worldwide, it is Aerosmith's best-selling studio album. It also hit #2 in the UK. Two songs ("Cryin'", "Livin' on the Edge") hit #1 on the Billboard Mainstream Rock chart. Its highest work on the Billboard Hot 100 was #12 for "Cryin'", as its pop chart performance was dragged down somewhat by the ongoing grunge movement.

The album spawned several music videos, some of which were popular on MTV: "Livin' on the Edge", "Cryin'", "Amazing", and "Crazy". The latter three of those became famous for starring budding actress Alicia Silverstone. "Crazy" also starred Steven Tyler's daughter, Liv Tyler, who would also become an actress in her own right.

The one last trope's a permanent vacation:

So, from all of us at Aerosmith, to all of you out there wherever you are, remember: the light at the end of the tunnel may be you. Good night.