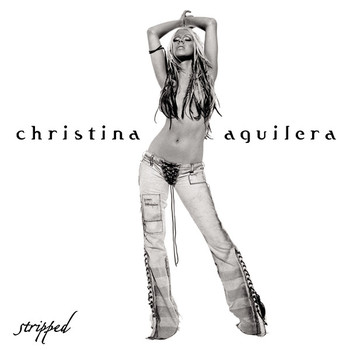 Sorry you can't define me
Sorry I break the mold
Sorry that I speak my mind
Sorry don't do what I'm told
Sorry if I don't fake it
Sorry I come too real
I will never hide what I really feel
No way, oh
Advertisement:

Stripped is the sophomore album from singer Christina Aguilera. It is her fourth album chronologically (following her self-titled debut, a Spanish language album with some songs from the first album adapted into Spanish, and a Christmas album), but Stripped is considered to be her second album as it has brand new music and a new direction.

Despite the worldwide success of her first album, Aguilera was unhappy with the bubblegum pop it consisted of, as well of being constrained by the Contractual Purity expectations of a pop princess. Stripped would see Aguilera taking creative control of the entire album and project. Aguilera worked with a number of other artists for the music, such as Alicia Keys, but it was Linda Perry (of 4 Non Blondes fame) would be the biggest influence of Aguilera throughout the recording process and musical direction. The album sees Aguilera singing about sexual empowerment, feminism, love, as well as opening up about her traumatic past.

Stripped was a commercial success, eventually selling over four million copies. The album's themes would end up inspiring a new generation of female singers, as both Selena Gomez and Demi Lovato would specifically name Stripped as a major inspiration for their own music.

This album contains the following tropes