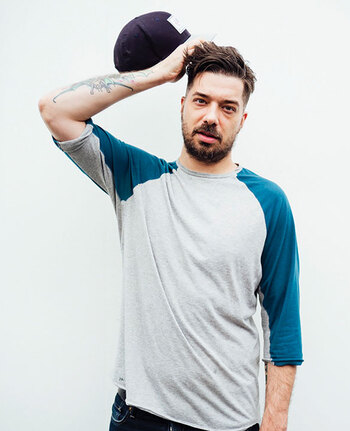 Aesop has been releasing music since 1997 when he released the self-financed Music for Earthworms. After another self-released album, he signed to Mush Records and released Float. Shortly after, he signed to El-P's Def Jux label, where he has since released a slew of successful albums, including his most well-known album, Labor Days. When Def Jux went on indefinite hiatus, Aesop transferred over to Rhymesayers, current home of such artists as Atmosphere, Brother Ali, and Rob Sonic.

If there's one thing Aesop is known for, it's his incredibly dense lyricism, regularly packed to the gills with absurdist metaphors, puns, imagery and references to pop culture and mythology all conveyed through complex internal rhymes. A study

even declared that he has the single largest vocabulary in hip-hop with almost 8,000 unique words, surpassing 85 other major rappers as well as Moby-Dick and the works of Shakespeare. He has stated that he builds up his lexicon through reading news and science articles and writing down all the words he finds interesting.

In addition to his solo work, Aesop is a former member of underground hip hop supergroup The Weathermen he was one half of Hail Mary Mallon alongside Rob Sonic, and he has released albums with Kimya Dawson and Tobacco as The Uncluded and Malibu Ken respectively. As a producer, he's also well known for producing hip hop duo Felt's 3rd album Felt 3: A Tribute To Rosie Perez, as well as the soundtrack to the movie Bushwick. He also contributed three songs to the 2019 video game Freedom Finger which he released as an EP in 2020.

Not to be confused with Harlem rapper A$AP Rocky. And yes — they have met

Aesop and his music provide examples of the following tropes: