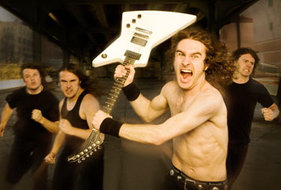 Spent all of my life breaking all the rules,
Stepping out of line, the streets are my school,
Can’t get enough of a good time,
Gonna live it up while still alive!
"Live It Up"
Advertisement:

To put it simply, AC/DC for the following generation.

Airbourne are a Hard Rock band hailing from Warrnambool, Australia.

The band is noted for their throwback Sex Drugs And Rock N Roll lyrics, and insane guitar riffs.