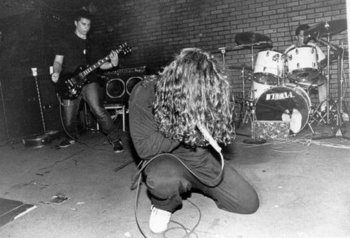 We're so dumb, we've got nothing new to say
We write the same song 30 times a day
About how you're a cunt or you're dumb or you're gay
But we'll keep writing them anyway
— "You (Fill in the Blank)," official transcript.
Advertisement:

Anal Cunt, also known as AxCx and A.C. for censorship reasons, was an American Grindcore band that formed in Newton, Massachusetts in 1988. The band was known for its frequent lineup changes, ending with Seth Putnam, Tim Morse, and Josh Martin. They built a name for themselves from extremely offensive lyrics and song titles as well as a distinct (and distinctly painful) musical style that took Grindcore well beyond its initial limits. Songs rarely lasted for more than a minute, thus, it was not uncommon for their albums to include 40-50 tracks, but with song titles such as "I Lit Your Baby on Fire," "Recycling Is Gay," "I Sent Concentration Camp Footage to America's Funniest Home Videos", and "Howard Wulkan Is Bald", perhaps brevity was a good thing.

They were also known for being shamelessly tongue-in-cheek, releasing, among other things, an acoustic grindcore single, EPs with increasingly and ridiculously large amounts of songs in them, and a completely insincere acoustic folk album, comically at odds with their entire discography.

The band folded, however, in June of 2011, when Putnam suffered a heart attack and died. He was 43. Seven years later, longtime member Josh Martin also died after accidentally falling off the side of an escalator in the Providence Place mall in Rhode Island.

The gayest tropes on earth:

"You're listening to 85.3 AM, and you just heard my favourite bands, Filter and the Refreshments."
SHUT UP!!!