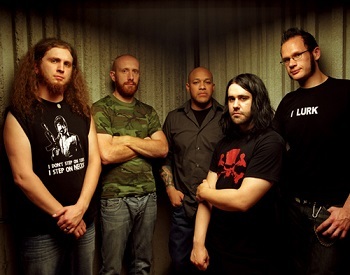 Obligatory photo of the band.
Advertisement:

Original singer Jesse Leach was replaced with former Blood Has Been Shed singer Howard Jones for almost a decade, before returning when Howard quit due to health problems. note Two types of Diabetes that were not helped by the band's hectic touring lifestyle

The band has released five studio albums to date. MTV once called the band one of "the founders of metalcore", which is actually inaccurate as the first metalcore bands were from the early nineties and consisted of bands like Integrity and Earth Crisis; the band's main innovation was fusing the sound of metalcore with the harmonized guitar melodies of Melodic Death Metal and clean singing, producing the subgenre which would come to be known as melodic metalcore. At any rate, Killswitch Engage are one of the most popular heavy groups around today, and are known as forerunners in the New Wave of American Heavy Metal, along with other popular heavyweights such as Lamb of God.