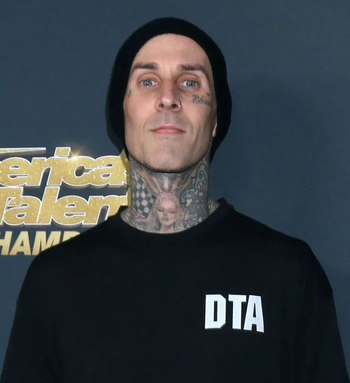 Travis Landon Barker (born November 14, 1975) is a drummer and record producer, best-known as the drummer for the band blink-182 and for his many, many collaborations with other artists (usually with a "featuring" credit), both as a drummer and producer. Initially a member of The Aquabats! before joining Blink as a replacement for Scott Raynor, Barker began working outside of Pop Punk in the mid-2000s following the band's hiatus, having already dipped his toes into the genre as part of the Rap Rock band The Transplants, when he formed the rock/hip-hop supergroup Expensive Taste with Paul Wall and Skinhead Rob and collaborated with the likes of The Black Eyed Peas, Bun B and T.I.. In the late 2000s, he began collaborating with DJ AM for an unusual group called TRV$DJAM, in which he played drums over AM's DJ sets, and found success in the late 2000s on YouTube, where he began posting videos of himself drumming over popular songs at the time including Flo Rida's "Low", Rihanna's "Umbrella" and Soulja Boy's "Crank That (Soulja Boy)".

On September 19, 2008, however, things changed - Barker, DJ AM and their entourage were on a private jet back to California after a concert in South Carolina which crashed during takeoff, killing everyone on board apart from the two musicians, including Barker's assistant Chris Baker and his security guard Che Still. Barker spent more than three months in hospitals and burn centers, undergoing 16 surgeries, blood transfusions that lasted 4–8 hours and numerous skin grafts, but remarkably, managed to recover enough to continue recording music before the end of the year. The crash left Barker with PTSD and a fear of flying, and he didn't take another plane for 13 years.

In 2011, Barker released his debut solo album, Give The Drummer Some, featuring a who's who of Hip-Hop including Lil Wayne, Snoop Dogg, Rick Ross, Pharrell Williams, Busta Rhymes, Lil Jon, RZA, Raekwon, TechN9ne, The Game and Lupe Fiasco. In 2012, he produced Psycho White, a collaborative EP with Yelawolf, and in 2016, he released Rawther, a collaborative EP with Asher Roth and Nottz. In the late 2010s, this prolific collaborative tendency ramped up significantly - Barker began working with various Emo Rap artists, including Lil Peep, XXXTENTACION and Lil Nas X, and releasing collaborative albums with rap group $UICIDEBOY$, LA rapper 03 Greedo and rap-rocker Nothing.Nowhere.

Having collaborated with him on his 2019 hit "I Think I'm Okay", Machine Gun Kelly asked Barker to produce a pop-punk album for him that became Tickets To My Downfall, with the success of the album sparking a revival of Pop Punk in The New '20s and making him an in-demand Record Producer, with him producing albums for Trippie Redd (NEON SHARK vs PEGASUS) and Avril Lavigne (Love Sux), and appearing as a drummer on tracks by Willow Smith, Demi Lovato, Charlie Puth, Iann Dior and Anuel AA.

In addition to his music, he's also the owner + founder of the apparel brand Famous Stars and Straps, and is something of a tabloid favorite thanks to his marriages to model Shanna Moakler (with whom he starred in a reality show called Meet the Barkers) and reality star Kourtney Kardashian.

Solo Discography (Barker's discography with The Aquabats! and blink-182 are on those bands' pages):

Tropes (tropes regarding The Aquabats! and blink-182 are on those bands' pages):