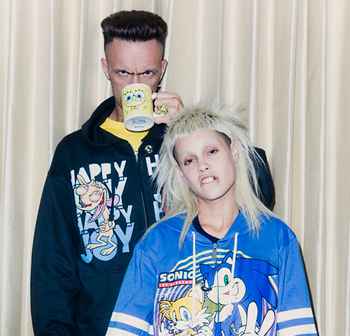 Ninja and Yo-Landi Vi$$er.
Die Antwoord ("The Answer") is a South African satirical rap group, with lead MCs Watkin Tudor Jones aka Ninja and Anri du Toit a.k.a. Yo-Landi Vi$$er. DJ Hi-Tek often appears with them, but it has not been confirmed whether they are a real musician or an actor in costume.
Advertisement:

One of the many musical projects Watkin has had. They started as Max Normal, later Max Normal.TV, doing "motivational raps" in Power Point presentations in local festivals. This eventually morphed into Die Antwoord, finally catching the attention from international media.

The group uses "zef" imagery, which That Other Wiki

defines as "a white, lower-middle-class subculture that glorifies cheap stuff". They're known for their High Concept videos and having a dedicated cult of followers.

They have been championed by Xeni Jardin of popular website Boing Boing.

Both of them moved into acting by playing major roles in Neill Blomkamp's South African deconstruction of "cute robot" stories, Chappie.

Die Antwoord and their music contains examples of: