The Bard on Board 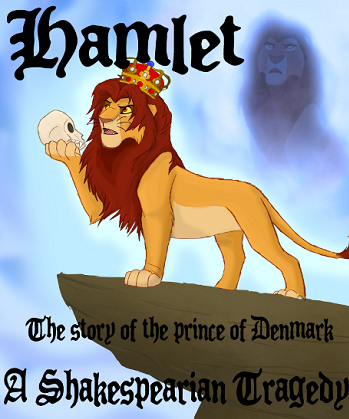 It's like Hamlet, but with lions.
"Shakespeare Did It First!"
— The Zeroth Law of Trope Examples
Advertisement:

William Shakespeare has created some of the most memorable works in the history of the English language. So when you're a struggling writer, trying to find a good plot, why not take one of his?

A subtrope of Whole Plot Reference, and also of Setting Update. A lot of Recycled IN SPACE! would be these as well (especially the rash of IN HIGH SCHOOL! films like 10 Things I Hate About You (The Taming of the Shrew), O (Othello), and She's the Man (Twelfth Night).

This trope only applies to works that follow the plot of a Shakespeare play, not to works using his characters or written as sequels. So Rosencrantz and Guildenstern Are Dead, despite being made entirely of characters in Hamlet, is not this. It would only be so if Rosencrantz was Guildenstern's evil uncle, who killed Guildenstern's father... So Alan Gordon's Thirteenth Night (being a sequel to Twelfth Night) doesn't count, but his An Antic Disposition (which follows the plot of Hamlet) would.

See also Shout Out: to Shakespeare. Not to be confused with Shakespeare in Fiction, which is about appearances by the man himself. Anyone who regards this as writers being unoriginal should consider that Shakespeare did this himself. All but two of Shakespeare plays (The Tempestnote And the plot points of the shipwreck were taken from the actual shipwreck of the Sea Venture in 1609 while on its way to Jamestown, while the magical plot elements are frequently viewed as a metaphor for the relationships between the English colonists, people they imported as slaves, and the indigenous inhabitants of the area. and The Merry Wives of Windsor), was taken either from Real Life history or from pre-existing stories.