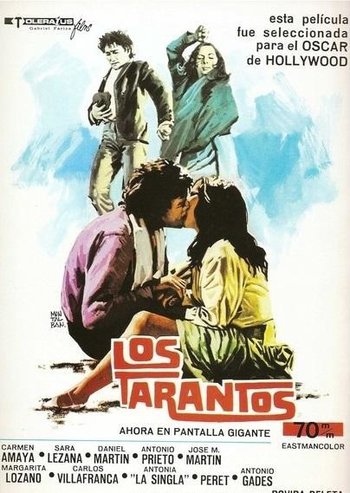 Los Tarantos is a 1963 film from Spain, directed by Francisco Rovira Beleta.

It is a Spanish take on Romeo and Juliet, set in Barcelona. The rival clans are the Zorongas and the Tarantos. Rafael Taranto, the Romeo, goes to a wedding and is enchanted by Juana Zoronga, the Juliet. They fall in love immediately. Rafael introduces Juana to his mother, Angustinas (Carmen Amaya). She is initially horrified but quickly comes around.

Juana's father Rosendo Zoronga, however, absolutely refuses to permit the marriage. Determined to head Rafael off, he promises Juana to the groom of his stables, one Curro (a combination of Paris and Tybalt from the play). A confrontation between Rafael, Curro, and Rafael's buddy Moji (the Mercutio) gets Moji killed, and soon more tragedy follows.

Last film appearance of Carmen Amaya, a world-famous flamenco dancer, who died of kidney disease just two weeks after this film was released.