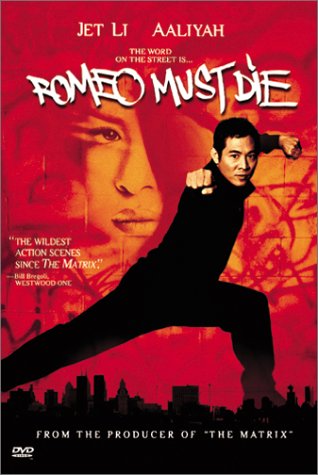 Romeo Must Die is a 2000 martial arts action film directed by Andrzej Bartkowiak and starring Jet Li and Aaliyah.

An African-American gang in Oakland, headed by Isaak O'Day (Delroy Lindo), and a Chinese gang out of Chinatown, headed by Chu Sing (Henry O) are at war on the streets of San Francisco over Bay Area waterfront property rights. This rivalry culminates in the death of Po Sing, Chu's son, by an unknown assailant. In Hong Kong, Po's brother/Chu's other son Han Sing (Li), learns of Po's death, and promptly busts out of prison and heads to San Francisco to avenge him. Trish O'Day (Aaliyah) is the daughter of Isaak who does not want anything to do with her family's mob activities. Han meets with her and she ends up assisting him in trying to find his brother's killer. A romance also burgeons between them. Isaak has since decided to go legitimate for the sake of his children and become the part-owner of a stadium that will be built on the waterfront. The owners of waterfront properties who refuse to sell are being murdered, but by who? And are they the same persons that murdered Po?

The film is regarded as Jet Li's breakout role in Hollywood (though he had formerly played the villain in Lethal Weapon 4.) It was also Aaliyah's first film and, due to her untimely death the following year, considered the best of her limited filmography.

Though the title, and the fact that it involves a guy and girl from rival crime gangs hooking up might give you the impression that this is a send-up of Romeo and Juliet, in reality, Han and Trish's romance is not really a major plot point.