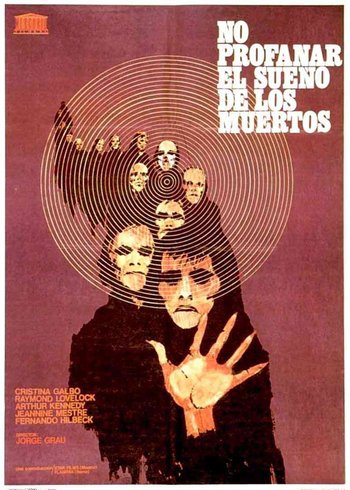 The Living Dead at Manchester Morgue is a 1974 Spanish-Italian zombie film that was written and directed by Jorge Grau, starring Ray Lovelock, Arthur Kennedy and Cristina Galbó.

A young woman named Edna goes to visit her sister on the outskirts of Manchester. Along the way she damages the motorcycle of a brash young man named George, who forces her to take him along for the ride. Once there, they find that "ultrasonic radiation" from a pest-control device is causing the dead to rise as Flesh-Eating Zombies.

As they fight off the zombies, a police sergeant named McCormick comes across the mutilated corpses and desecrated graves. Misreading the evidence, he concludes that a cult of devil-worshipping murderers are loose - and Edna and George are his prime targets.

In the eighties, the film was targeted during Britain's Video Nasties scare, though it was not on the prosecuted list.

The Living Dead at Manchester Morgue contains examples of the following tropes: