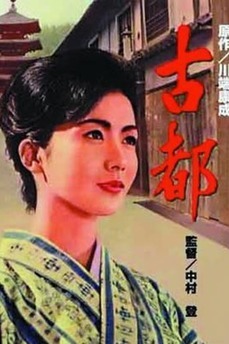 Twin Sisters of Kyoto (古都, "Koto"—"the old city" or "the old capital") is a 1963 film from Japan directed by Noboru Nakamura.

Chieko is a 20-year-old woman who still lives with her parents. Her father Takashiro is a designer of kimonos. Chieko's parents have no other children, and in fact she is not their biological daughter. Dialogue reveals the disturbing truth: Chieko's parents found her outside as an infant, apparently abandoned, and simply picked her up and took her away. Her father worries that they may have straight-up kidnapped a baby that had simply been left alone for a moment. Chieko for her part yearns to find out about her biological relations.

That mystery is solved when Chieko runs into a woman named Naeko, who as it turns out, is Chieko's identical twin sister. (Both characters are played by actress Shima Iwashita.) Naeko reveals that Chieko was abandoned. It seems that in rural Japan especially, twins are considered unlucky, so Chieko's bio parents simply set her outside for someone to pick up. Naeko herself was orphaned when her parents both died when she was young.

The sisters' tentative relationship is frustrated by class differences, with Naeko being working-class while Chieko's adoptive father is well-to-do (even if his business is failing). There's also the matter of Hideo, a weaver who is besotted with Chieko but winds up confusing her with her twin sister.

Adaptation of a Japanese novel called The Old Capital, or in Japanese, "Koto". The novel was adapted again in 1980 by Kon Ichikawa, in 2005 as a TV miniseries, and yet again in 2016.