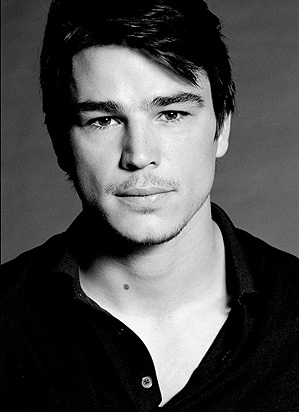 Joshua Daniel Hartnett (born July 21, 1978) is an American actor and producer, best known for his heartthrob image in the early 2000s.

His early performances (namely, Trip Fontaine in The Virgin Suicides and Hugo in "O") were well received by the critics, proving that despite his heartthrob image the guy was not just a pretty face. Sadly, he soon became every girl's celebrity crush and got swallowed up in the hype that brought in lame movies and lazy acting, culminating with the 2001 disaster Pearl Harbor.

Known for his 6-foot, 3-inch frame, deep voice and a prominent beauty mark on his neck, Hartnett was considered one of the main teen sex symbols (and one of the few reasons people actually went to see Pearl Harbor). He's also more famous for his relationships with celebrity beauties, such as Scarlett Johansson, than for his acting achievements.

After the hype has died out, Hartnett opted for a change in his career, turning to smaller, indie films or more serious directors. Some of these attempts proved to be huge flops (such as Brian De Palma's The Black Dahlia), but he has landed several praised performances, such as in a little-known film, Mozart and the Whale, where he played a character with Asperger Syndrome, and in Lucky Number Slevin. Began to undergo a Career Resurrection as gunslinger Ethan Chandler on Penny Dreadful, followed by performances in studio films like Wrath of Man and Operation Fortune.