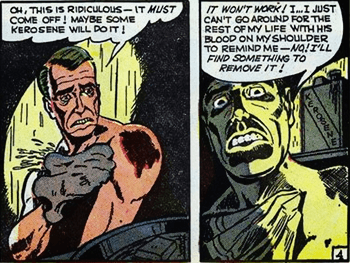 Consumed by guilt, a killer tries to wash away the blood they know is on their hands, but they can't, no matter how much they scrub. This can extend to obsessively trying to clean away imagined bloodstain, or other evidence, when there is no physical trace of the crime left. Can overlap with Shower of Angst.

Please note that examples of this trope need not always involve literal washing. Quite often, in fact, it is manifested in any general sense of feeling "dirty."

As the name comes from William Shakespeare, this is Older Than Steam at the very least.

This is an example of Truth in Television: the New York Times published a study showing that some people wash their hands when they have feelings of guilt.

Compare with Brain Bleach, which is used to scrub away unpleasant mental images instead of guilt. Compare also with Terrible Ticking, where the guilty person hears something symbolic of their guilt. Can be one of numerous tics that result from a Sympathetic Murder Backstory... or not so sympathetic. Sometimes accompanied by a Madness Mantra or a Guilt-Induced Nightmare. See also Must Make Amends, Blood Is Squicker in Water. Often part of a Dark and Troubled Past. Contrast These Hands Have Killed, which tends to be a more temporary reaction.

Not to be confused with really annoying TV spots that you wish would go away. It's not about that obnoxious dog you don't want to have indoors either.

WARNING: This trope quite literally concerns flesh and blood, so possible Squick ahead.