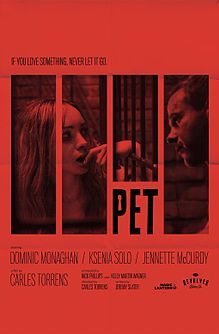 Pet is a thriller staring Dominic Monaghan as Seth, Ksenia Solo as Holly, and Jennette McCurdy as Claire. It premiered on March 11, 2016 at the South by Southwest Film Festival, had a limited theatrical release on December 2, 2016, then was released to DVD on December 27, 2016.

Seth is an animal shelter worker who becomes obsessed with a waitress named Holly. When his attempts to woo her fail, he resorts to kidnapping her and trapping her inside a cage. He soon discovers that Holly is not who she appears to be, and an eerie battle of wits follows as the audience tries to figure out who is the cat and who is the mouse.