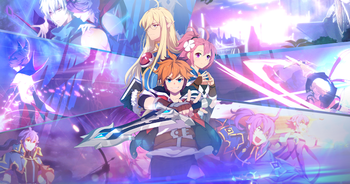 It was first released as CBT in September 2017 and officially released in January 2018 in South Korea. The game was then localized in English on a Philippines server in July 2018. The game was also released in Japan, receiving Japanese voice-overs (which the English PH server also got later on), as well as in Taiwan and is set to have a Brazilian server.

Following the events of the Tower of Disappearance from the original game, a dimensional rip has opened up, causing the Grand Chase party to be scattered across worlds.

The story starts with Kassias Grandiel's two apprentices in the world of Krictria, Kyle and Cindy, who come upon Arme having just fallen from the sky into the mountains near their home.