Literature / A Tree Grows in Brooklyn 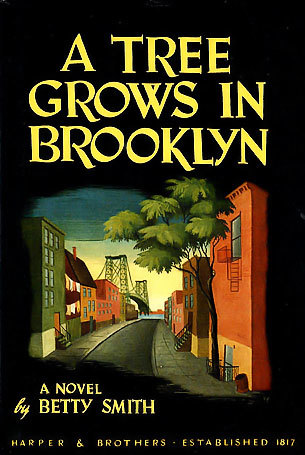 A 1943 American novel by Betty Smith about Francie Nolan, a girl growing up in Williamsburg, Brooklyn, in the 1900s and '10s. It draws significantly on Smith's own experiences, dealing with poverty, vice, and issues of class, education, and immigrant status.

The book was a huge bestseller when it was published, which is notable because of its frank and sympathetic treatment of sex (especially women's sexuality) and other then-controversial subjects.

Notable adaptations include the 1945 Film of the Book directed by Elia Kazan, with Academy Award-winning performances by James Dunn as Johnny and Peggy Ann Garner as Francie; and a 1951 Broadway musical, which Betty Smith helped George Abbott adapt from her book, unsuccessful despite very good songs by Arthur Schwartz and Dorothy Fields and Shirley Booth's show-stealing portrayal of Cissy (as Sissy's name was spelled in this version).