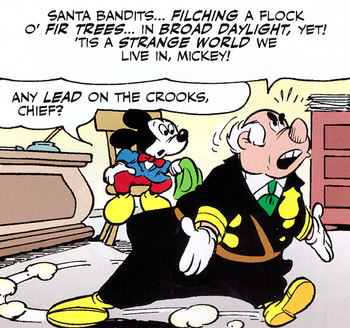 "And to his left is your typical drunken, oafish police chief with his hat on crooked, most likely named Barney O’Blarney or Patrick O’Hallorahanfitzmichael or something like that."
— The Agony Booth

In every police precinct, you'll have several stereotypical types of cops. The most common of these will always be the O'Hara, the cop with the whimsical Irish accent who usually stands on the sidelines, offering recycled stereotypical quips about St. Patrick and the green hills of Oireland.

This sort of officer rarely, if ever, resorts to force when dealing with a perp, but may visibly carry a nightstick. He will often have an impressive mustache.

Historically this was Truth in Television in many places in the English-speaking world. Police departments in American cities like New York (around 1900, five-sixths of the NYPD was Irish), Boston, Chicago, Philadelphia, and Baltimore were disproportionately staffed by Irish immigrants.note ("Fifteen thousand Irishmen from Erin came across./Tammany put these Irish Indians in the police force.") This also rang true in other New World colonies like Australia (in Ned Kelly's day, 80% of Victoria's police), Canada (the NWMP was based on the Royal Irish Constabulary) and New Zealand (as much as 40% in the 1930s

). (This is the oft-cited reason why a police van was colloquially known as a "Paddy Wagon".note Another claim is that it got its name from the Irish drunks it often hauled. As an old New York City joke goes, "If it weren't for the Irish we wouldn't have a police force — and if it weren't for the Irish, we wouldn't need one.") A large wave of Irish immigration during the 19th century coincided with the time when major cities started establishing "professional" police forces, and police work was one of the few jobs open to Irish immigrants at the time. In Real Life, police forces offer many opportunities for recent immigrants, and they sign up, partly to protect their own people. Because early police work closely resembled thuggery, it was not a prestigious position, and because poorly-paid police were vulnerable to corruption, the police were widely despised. It did not take long for the urban police and The Irish Mob to become partners.

Mostly a Discredited Trope these days. Of course, Irish-American cops still show up frequently (noticeably in The Departed in which nearly all the cop characters are Boston Irish — and all of the criminals are part of The Irish Mob), but the just-off-the-boat accent and whimsy are long gone — except somewhat in Historical Fiction. In modern works, Irish-American officers might be following in the footsteps of several generations of police families and/or trying to live up to a parent who died in the line of duty. Additionally, in many modern works, cops in big-city police departments on the East Coast are often portrayed as being honorarily Irish even if they are not of actual Irish descent — which, given the extensive adoption of Irish customs within these departments (particularly wakes for fallen officers and fake wakes for retired ones) is more or less Truth in Television (see The Wire for a good example: the Baltimore P.D. is one of those departments; also, many NYCPD-focused shows will have this element show up).note To paraphrase Lenny Bruce, in the NYPD, even if you're Black, you're Irish.

Compare Irish Priest, the other stereotypically Irish profession in American fiction. Obviously a case of People Sit on Chairs if the work is actually set in Ireland.

Not to be confused with police officers in the Republic of Ireland, who are called gardaí (singular garda) and colloquially known as "guards".

Frosty encounters the traffic cop, like in the song.

Frosty encounters the traffic cop, like in the song.