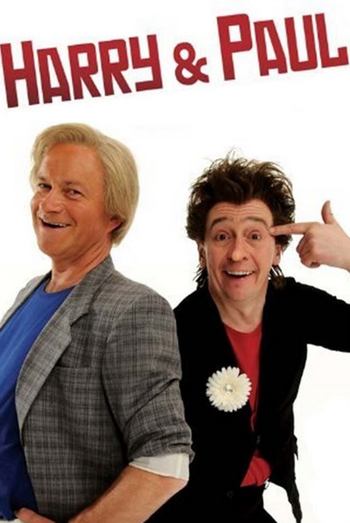 Harry and Paul was a British Sketch Show which aired between 2007 and 2012, lasting 4 seasons (the first one was titled Ruddy Hell! It's Harry and Paul). The concept is to bring back together Harry Enfield and Paul Whitehouse, who had previously worked together on Harry Enfield and Chums — Whitehouse is now at least as well known for The Fast Show. Other Fast Show actors, such as Simon Day, started appearing in series 2.
Advertisement:

A running theme seems to be that of class warfare and cultural divisions in British society. This was true to some extent in Harry Enfield and Chums, but is more obvious here. A second major theme, growing more prominent over time, is that of examining past attitudes with Retraux and Deliberate Values Dissonance.

The show has had a mixed reception: Some people love it, others hate it.

Enfield and Whitehouse, along with some of their co-stars, reunited in 2014 for The Story of the Twos, a Mockumentary retrospective for the fiftieth anniversary of BBC Two. Hosted by a parody of Simon Schama, the episode spoofs many of the shows broadcast on the channel including Newsnight, I, Claudius, Boys From The Blackstuff, Blackadder and The Fast Show.

Harry and Paul provides examples of the following tropes: