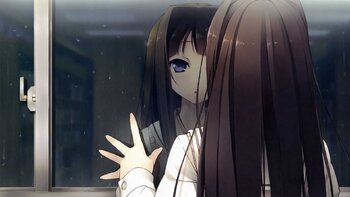 Fiction is full of symbolism, and windows are rife with symbolic potential. They can represent the past, the future, or the present. They can also serve as a point of reflection, both literal and figurative.

There are many ways to play a Drama Pane. One character, anticipating a crisis, will stare out of a window contemplatively, often their own reflection staring back at them over the background. Or, if in the middle of a conversation, they could rise from their seat and stare out the window after being given an Armor-Piercing Question, then wax philosophic or deliver an Exposition Dump. In a more action-oriented film, a character standing by a large window while attempting to deliver exposition can expect to be shot from outside the window, because He Knows Too Much.

A character may also look out of a window to watch impending storms, again both in the figurative and the literal sense. In fact, someone doing this might say "A Storm Is Coming".

Large windows typically work best for these situations, but any window, or devices that function as windows, will do. Despite the name, literal glass panes are not a requirement. Merely the presentation of the device as a type of window. We may either see the character from behind, staring out the window with them, or we might stare into the window from the outside, seeing their face and the concern on it.

May overlap with Contemplative Boss. Compare with Window Watcher, for a character who is constantly spying out of the window, or Conveniently Seated (often near a window).

Merely noticing people or things out of a window doesn't qualify for this trope. Typically played for dramatic effect, it is also the sort of moment that can be played comically, such as in a parody.