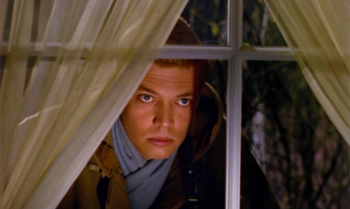 You better watch out...
Advertisement:

Window watchers are people that look in on someone else by looking through their window secretly. The window watchers are usually looking to see something inappropiate or sexual spying on someone they have a crush on or looking at a family they are no longer with to see how they are doing. The most common way is to crouch down under the window and look up. The more experienced window watcher can look down from the roof. This activity is mostly done at night in dark clothes so they are not seen. They can also come dressed up as a worker with a job that involves working in the yard or house or get that kind of job just to do that.

Closely related to The Peeping Tom, which is about peeping through windows to see people naked.