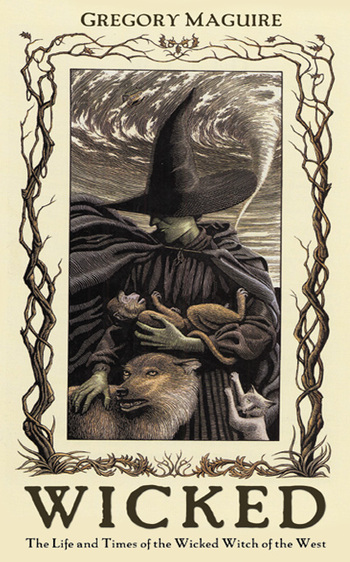 Rick: What are you reading?
Kirsten: It's a queer-revisionist telling of The Wizard of Oz.
Rick: There already was a queer revision of The Wizard of Oz. It was called Wicked, and it was even gayer than the original!
— Rick & Steve: The Happiest Gay Couple in All the World
Advertisement:

Wicked: The Life and Times of the Wicked Witch of the West, a 1995 novel by Gregory Maguire, is the story of Elphaba, who will one day become that Wicked Witch of the West. The original novel was expanded into a four book series entitled The Wicked Years. Son of a Witch revolves around Elphaba's possible son Liir, A Lion Among Men around the Cowardly Lion, and the fourth and final book Out of Oz around Liir's daughter Rain.

Wicked describes how Elphaba is born with green skin after her mother had an encounter with a travelling businessman. Her mother gives birth to an armless child, Nessarose, and then later dies giving birth to Elphaba's third sibling, her brother, Shell. When Elphaba is older, she goes to school at Shiz, and is roomed with the pretty, popular Galinda. At first, Galinda is not happy about this.

Things change, however, when Professor Dillamond, their Talking Animal teacher, is found dead, soon after Animal hate speech started being promoted by faculty members, prompting Galinda to change her name to Glinda in honour of him. Elphaba and Glinda become close compatriots and the former rescues a Lion cub brought in by his replacement, and gains a passion for fighting for Animal rights. Elphaba goes to the Emerald City to speak to the wizard of this, and her life changes forever. Events push the two friends along their paths towards becoming the Good Witch of the North and the Wicked Witch of the West.

The book inspired a Lighter and Softer musical adaptation in 2003, which became one of Broadway's biggest hits. The musical version will receive a film adaptation from Universal.

Alternative Title(s): The Life And Times Of The Wicked Witch Of The West