Western Animation / Rick & Steve: The Happiest Gay Couple in All the World 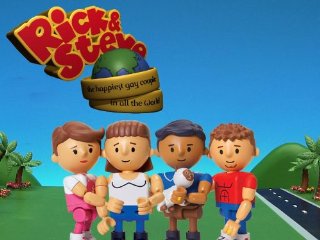 Rick & Steve: The Happiest Gay Couple in All the World is a satirical stop-motion show created by Q. Allan Brocka that airs on LOGO, the first network dedicated to all gay and lesbian programming. It focuses on a trio of couples in the "gay ghetto" of West Lahunga Beach, California (an expy for Laguna Beach). Premiering in 2007, it has met with much critical acclaim, due to its satire not being too preachy. Despite season 2 ending on a cliffhanger, the show is no longer in production. The characters are: