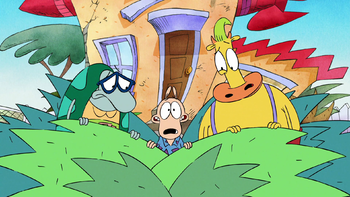 After being stuck in space for 20 years, Rocko, Heffer, Filburt and Spunky return to a late-2010s era O-Town with modern amenities such as constantly updating smartphones, radioactive energy drinks, food trucks and coffee shops on every corner. Rocko, who does not share Heffer and Filburt's enthusiasm for the 21st century, attempts to get his favorite television show The Fatheads back on the air since it is the last remnant of his past; to do so, he goes on a quest to find the show's creator, Ralph Bighead.

WARNING: This is a very spoiler-heavy movie, and while some are marked, others may not be. Proceed at your own risk.