Film / The Cow and I 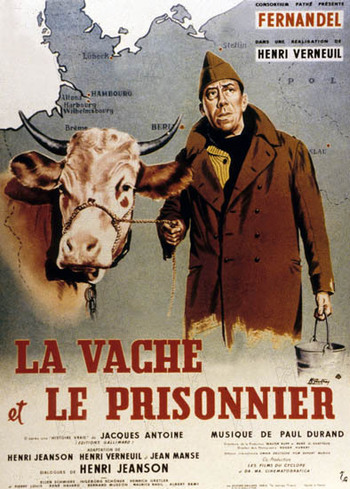 The Cow and I (French title La Vache et le Prisonnier, literally The Cow and the Prisoner) is a 1959 French dramedy film directed by Henri Verneuil and starring Fernandel.

In 1943, Charles Bailly (Fernandel) is a French prisoner of war in Germany since the French defeat of 1940. He is employed as work force at a farm, and while such fate is way more enviable than it is for many other prisoners, he decides to try an evasion. To do so, he takes the farm's cow, named Marguerite, with him, so the German soldiers he encounters on the way will be fooled into thinking he works in the vicinity anywhere he goes.

The Cow and I provides examples of: