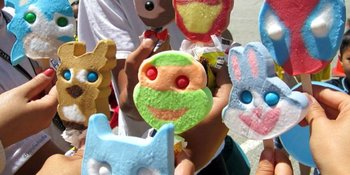 Just some of these ice cream bars.
"Look, I'm a comic book. I'm a cereal. Did a Christmas album. I have an excellent theme song... and a so-so popsicle."
— Peter Parker, Spider-Man: Into the Spider-Verse
Advertisement:

Ahhh... ice cream. What prevents us from being parched during scorching hot summer days whenever the ice cream truck comes to the neighborhood. And looking at the stickers you see... that one of your favorite characters is featured as a popsicle!

Since the late 1980s or earlier, ice cream bars themed after cartoon characters have been popular as a feature of ice cream trucks and convenience store ice cream cases. Now kids can enjoy eating their favorite characters' heads or such. These often have a tendency to look only somewhat like the character when taken out of the packaging.

Subset of The Merch.