This Loser Is You 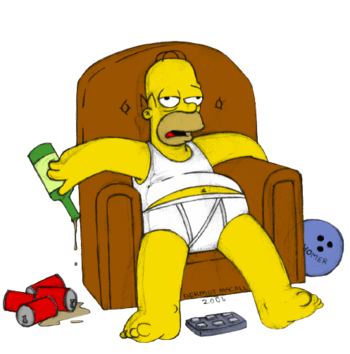 America, America, this is you.
Art

.
"Wake up, will ya? You're living in some kind of fantasy world! Here's a dose of reality for ya. You're a weakling. You're never gonna be strong no matter how hard ya try. You're a loser! You're always gonna be a loser and guys like me are gonna step on ya for the rest of your worthless life!"
— Daimonji, Kenichi: The Mightiest Disciple
Advertisement:

You can't spell sympathetic without pathetic!

In many shows, mostly comedies and children's programs, a protagonist or another major character is an ugly, incompetent, lazy, and near illiterate ditz. This is supposedly to allow the audience (i.e., you) - say for insecurities or arrogance in the face of one's flaws either way - to identify with the character or protagonist. Ergo, the loser protagonist is you. This also allows for more room for Character Development, a lot of Character Development...or none at all. This also makes it easier for writers to come up with the plot of the week.

An alternate theory is that the protagonist is made so dumb so that you feel superior to him, no matter how dumb you might be. Both of these could be true at the same time.

Note that this same person's friends are all clever, athletic, highly competent and, above all, cool. Why such an implausible situation? It's because, while the protagonist sucks just like a lot of people watching should, at least he has friends that are just the kind of people they wish they or maybe you knew. Which is supposed to make you identify with him even more. At least, that's what the network executives seem to think. As far as they're concerned, Viewers Are Morons.

Paradoxically, applying This Loser Is You too accurately or too inaccurately can make the fandom riot to a far greater degree than anything you actually put in the storyline. After all, no one likes it when you imply (or outright state) that he's a loser.

This Loser Is You may lead to Good Is Dumb when the morality of this sort of main character is portrayed as inversely proportional to their capability (especially on an intellectual level). A partial subtrope of Audience Surrogate. Not to be confused with Take That!, when someone openly expresses his hatred for something, often in a witty manner. Also not to be confused with A Winner Is You, which is something else entirely.

Could lead to Fridge Logic when the protagonist wins and the enemies don't suck. An extreme and rather cynical version is Humans Are Morons.

See also I Just Want to Be Special when the character tries to change. Compare Unlucky Everydude.

In short, this is where the everyman character or Audience Surrogate is a "typical" loser like half the audience is imagined to be. This is usually intended to make them endearing. A sub trope is Loser Protagonist.

This trope pops up a lot in Magical Girl shows where the protagonist is described as having been an ordinary girl prior to getting powers and is thus lazy, childish, selfish, etc.

This isn't about, say, a work outright saying that the audience or viewer sucks. Also, this trope is not about hostility toward the audience. For that, see You Bastard!, Viewers Are Morons and/or Take That, Audience!. Also is rarely justified with a "The Reason You Suck" Speech, despite what you might think.

It should be noted that in contrast he put heroic, or at least positive, characteristics in Bugs Bunny ("Bugs is what I wish I was; Daffy is what I fear I am.") It's also worth noting that Daffy's frequently portrayed sympathetically, and unlike Bugs, can actually lose. Daffy may be emblematic of neuroses about failure, but a lot of people find him funnier than Bugs for just that reason. Amusingly during the odd occasions Bugs lost, his character was inexplicably converted to this, quickly losing all his composure at the premise of someone actually managing to outdo him (perhaps most evident in his rivalry against Cecil Turtle) where HE was the Villain Protagonist. Daffy was the more consistent loser, but at least that meant he was slightly more accustomed to it than Bugs, who couldn't take it back at all.

Alternative Title(s): You Suck, A Loser Is You