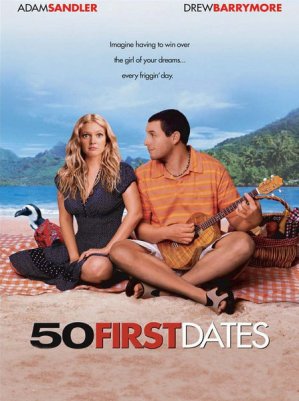 50 First Dates is a 2004 American Romantic Comedy film. It stars Adam Sandler as a woman-chasing veterinarian (Henry) and Drew Barrymore (Lucy) as an amnesiac due to a brain injury during a car accident.

Henry is an ocean wildlife veterinarian in Hawaii who has built up a reputation of seducing attractive tourists who are looking to blow off some steam. In a chance encounter, he meets Lucy at a local restaurant and they connect, they have a great first date but the next day she looks at him like he's a stranger. He learns that a car accident a year ago has given her a head injury, permanently damaging her ability to form new long term memories, forgetting everything when she goes to bed and starts the next day as though it was the day of the accident. Her closest friends and family have resolved to let her believe it is the day of the accident.

Recognizing the difficulty of building a relationship with someone who will never remember him the next day, Henry finds himself unable to just let her go. So he resolves to "meet" her and have her fall in love with him anew every day. Hilarity Ensues.