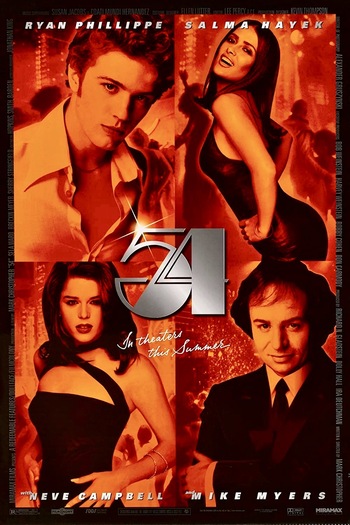 "Welcome to the Party."
Advertisement:

A 1998 American drama film written and directed by Mike Christopher, about the legendary, eponymous New York City disco club of the 1970s.

In 2015, a director's cut was released. This cut restored 40 minutes of original material and cut 30 minutes of studio reshoots. Most of what was cut were scenes showing bisexual and homosexual relationships, including a kiss between Shane and Greg. As well as entire sub-plots, such as Shane and Anita's affair and Greg struggling with the decision to have sex with his boss for a promotion.

The director's cut also features a different ending, with Shane, Greg and Anita staying together as a family rather than drifting apart.

This film contains tropes of: