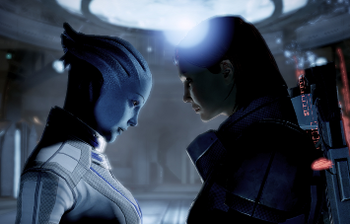 It's not gay if she's an alien, is it? note As of the fourth game, it is.
"The same-sex love issue is by now well-tread territory for BioWare — most fans know by now that Juhani from Knights of the Old Republic is a lesbian and Jade Empire allowed same-sex romance for both genders. So why should it be different in Mass Effect? Does BioWare think that their audience will clamor for girl-on-alien-girl action while recoiling from man-on-man love? And why is lesbian sex only OK if it involves another species?"
— Joystiq.com

They look exactly like hot women, and they make out with other hot women. But they're actually aliens/immortals/Body Snatchers/etc. So it's not really gay, right?

Discount Lesbians (or Discount Gays, or Discount Bisexuals, etc.) are canon queer characters who appear to be male or female, but they're either aliens that don't define gender/sex the way humans do, they come from an One-Gender Race, they don't reproduce sexually, they're genderfluid shapeshifters, they're humans that have been magically or technologically altered in ways that affect their sexuality/gender, so romancing them doesn't really "count" as gay. This usually seems to be a device used within the story that lets the (presumed) audience watch two hot chicks making out without having to think about the associated real-world issues of homosexuality. On the other hand, the trope may come into play if the writer wishes to include a lesbian relationship in the story but is worried about Moral Guardians, thus becoming a way for a Rule-Abiding Rebel to make an attempt at Getting Crap Past the Radar.

Note that they're Discount Lesbians only if they're included in the story in a way that obviates the need to address the associated issues of sexuality. Characters used to draw attention to those issues are inversions, although this can still fall into Fantastic Aesop or Space Whale Aesop. If the character is explicitly stated as being homosexual, especially if their race/species has conventional definitions of gender and sexuality, then they're not Discount Lesbians, just a gay person that happens to be non-human.

Basically, they're gay, but not really; much like how a discount brand isn't exactly like the premium name brand (hence the trope's name). Commonly carries Unfortunate Implications (see page quote). It can be considered a subtrope of But Not Too Gay.

Compare Non-Human Non-Binary, a similar concept that explores non-traditional gender identities (vs. this trope's sexuality focus) through non-human characters. Also compare Have You Tried Not Being a Monster?, Lesbian Vampire, Bury Your Gays, and (occasionally) Elfeminate and Flaming Devil. Related to Deceptively Human Robots because both are only as robotic/gay, respectively, as is convenient for the show. Also see Space Jews for aliens standing in for minorities. Related to Hide Your Lesbians in that both are a way of including apparently gay content without admitting to it. See also Speculative Fiction LGBT, which is about how Speculative Fiction settings make showing LGBT acceptable.