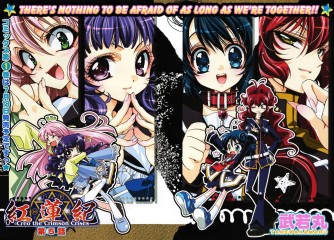 Suou is an Ordinary High-School Student if one that gets headaches frequently. Well, at least she thinks she is. It all changes for her on a day at school she gets a headache larger than any she's had before. Exiting class and taking a moment to look through the window over Lake Cindy, things start getting weird. The lake turns blood red and a vortex appears. Out of the vortex pops an odd-looking woman claiming to be her beloved master, Creo Levigister.

The meeting with Creo asks a whole bunch of questions. Who is this supernatural princess? Why does she have the ability to cure Suou's headaches? What is Suou's connection to her? What is the true meaning behind Suou becoming Creo's "Sheravi"? Is Suou really just an Ordinary High-School Student?

Creo the Crimson Crises is an Shoujo style Yuri Genre manga by Takewakamaru, which was serialized quarterly in Yuri Hime from 2007 to 2010.