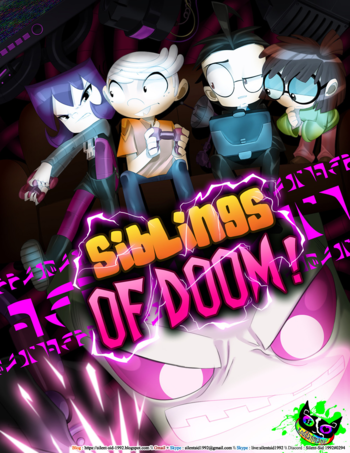 is a crossover fanfiction story by author Mr Dusk featuring characters from The Loud House and Invader Zim.

After the Loud Family's house is destroyed in a tornado, the Louds move to another city to start their life anew. Unbeknownst to the family, their new home is located within close proximity to the Membrane family and Irken Invader Zim, who - upon learning that humans are commonly known to have siblings - immediately tries to rectify his apparent familial deficiency. Meanwhile, Lincoln astonishingly befriends Gaz while Lisa ends up transferring into Dib's classroom.

The story is being translated into Spanish

Siblings of Doom! contains examples of: