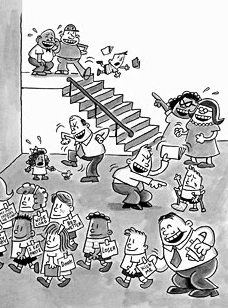 What happens when the bullies never leave school.
"And my high school: it felt more to me
Like a jail cell, a penitentiary"
— Good Charlotte, "The Anthem"
Advertisement:

The opposite of Elaborate University High, a school that isn't very good at teaching because of budget issues. Expect the textbooks and the technology to be massively out of date and have Cold War-era information at best. It may or may not be an Assimilation Academy. The school is often full of ridiculously mean teachers, bullies of all races, colors, creeds, and social backgrounds, practically inedible lunch food, and it's all run by an even worse principal. The trope is often used to satirize or dramatize how horrible the public school system is (especially if this trope is used in an American work, as parents and adults worrying over the quality of children's education is a major issue). Junior High in particular is a common target of derision, leading to the idea that Middle School Is Miserable.

The Inner City School is often the victim of this trope. The Boarding School of Horrors is even worse, especially because you have to live there. A Dustbin School often overlaps with this. Contrast the Cool School, where even if it's not all sunshine and rainbows, it's well worth it. See the Phony Degree trope when the Sucky School is a college that's little more than a diploma mill. See also Daycare Nightmare, for even younger characters.