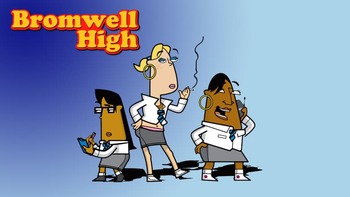 Our protagonists from left to right: Natella, Latrina, and Keisha
Advertisement:

Bromwell High is a British-Canadian animated comedy produced by Britain's Hat Trick Productions and Canada's Decode Entertainment that aired in 2005.

Keisha, Latrina, and Natella form a Comic Trio at Bromwell High, an incredibly poor state school, and the show profiles the wacky hijinks of their everyday lives. The show also notably averts Two-Teacher School by giving the teachers just as big of a part (if not bigger) in the plots as the students.

The series' thirteen episodes aired on Teletoon’s Detour block (basically, its version of Adult Swim) in Canada, and had an incomplete run on the UK's Channel 4.

When a Tsundere gets sent on trial for nearly killing her crush, hilarity ensues.

When a Tsundere gets sent on trial for nearly killing her crush, hilarity ensues.