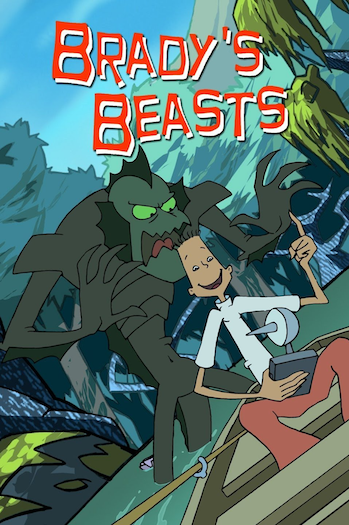 A Canadian-French-British animated series, which debuted in 2005 on YTV, about the adventures of 12-year-old Brady Plunkett, who lives in a world where monsters are commonplace and make popular household pets. Brady is the local monster expert in the town of Ravenville; whenever there's a monster problem, be it a rampaging dragon or just a yeti who keeps getting into people's garbage cans, he's the guy you want.

Brady often enlists help from his best friend, 12-year-old Virgil Arp, which Virgil isn't too happy about. Occasionally, he'll also call upon the services of their other friend, 13-year-old Ember Tombs, another monster-lover with a style of dress that suits her name well.

A recurring plot point is Brady's search for his own pet monster, who goes missing in the first episode after being chased off by townspeople.

The series is based on the book How to Care for Your Monster by Norman Bridwell, author of Clifford the Big Red Dog.

The official website hosted a point-and-click adventure game called Monster Quest in which the player controls Brady, wandering around the town of Ravenville to solve puzzles and complete a series of quests.

Tropes from the show:

Tropes from the Monster Quest game: