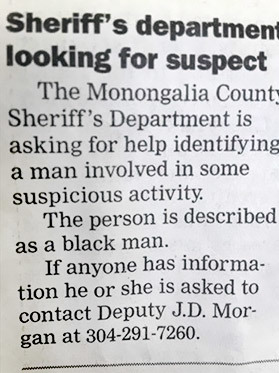 Time to round up the 1,728 suspects in Monongalia County, West Virginia that fit this description.
"This is Papa Bear. Put out an APB for a male suspect, driving a... car of some sort, heading in the direction of... you know, that place that sells chili. Suspect is hatless. Repeat, hatless."
— Chief Wiggum, The Simpsons, "Homer's Triple Bypass"

You're a witness to a crime, and you saw the criminal and which way he's going. There's just one problem: you can only offer a uselessly vague description of no help to anyone. For example, the best you can do is that you're almost certain he wasn't wearing a hat. This happens with both civilians and police officers.

Basically, a witness gives a vague and more or less useless description, with the only definite clues being ultimately irrelevant (or at least apparently unhelpful).

Truth in Television, when it comes to witness descriptions, especially in cases when it wasn't obvious that the suspect was committing a crime at the time.

May result from watching The Nondescript commit a crime, since they're naturally unmemorable.