Western Animation / The Buzz on Maggie 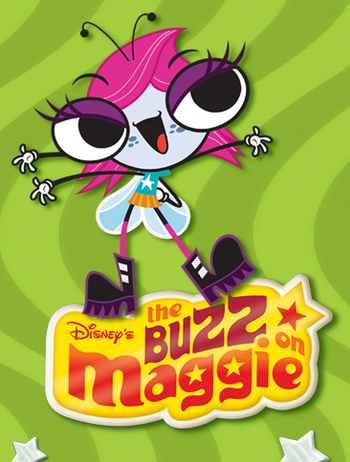 In some average American city, there's an average garbage dump that is host to your average miniature insect metropolis. But make no mistake: the town of Stickyfeet will give rise to a rock legend that will be remembered for eons. Assuming that she can keep her ridiculous impulses in check and not alienate everyone around her, that is.

The Buzz on Maggie (2005-2006) was a short-lived Flash animated series that aired on Disney Channel. Created by Dave Polsky and directed by Dave Wasson (Time Squad), the show centers on Maggie Pesky, an energetic, pink-haired teenage fly girl who aspires to be a world-famous musician. Along for the ride are her best friend Rayna Cartflight, her younger brother Pupert, and her older brother Aldrin. The series also came with an upbeat theme song performed by Skye Sweetnam.

Despite high ratings in its home country, the series failed to gain an audience overseas and ended after one season, leaving it as one of Disney Channel's more obscure animated series (even Disney+ doesn’t have it). Though at the very least, it holds the distinction of being Jessica DiCicco's first voice acting role (as the titular character).