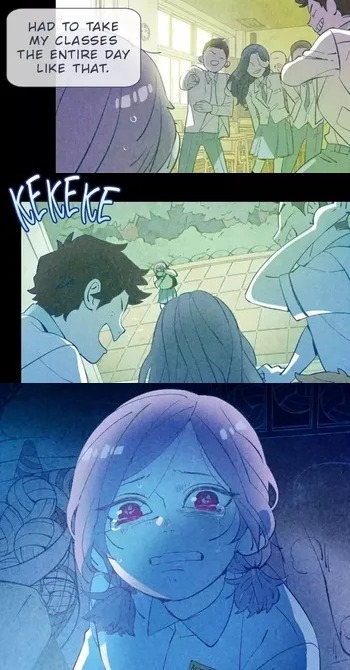 All you'll ever be is a fading memory of a bully.
Make another joke, while they hang another rope so lonely.
— "Bully", Shinedown
Advertisement:

Not all characters who suffer schoolyard bullying brush it off. A character who is being bullied will often be depicted as a sullen, depressed figure due to all the bullying. This is especially common with All of the Other Reindeer scenarios.

This trope has become increasingly common since the 1990s and has begun displacing the old archetypes of bullying victims being unfazed by their abuse. With the rise of understanding on bullying and how it affects people, it's more common for bullying victims to be depicted as troubled and depressed rather than just "nerdy weaklings" like they used to be.

This is Truth in Television. While not all bullying victims suffer the same way, bullying often has negative effects on the psyche of the one being bullied. This can lead to poor self-esteem, various mental health issues, Self-Harm, and suicidal behavior.

An aversion of School Bullying Is Harmless. Related to Bully Brutality and Gayngst-Induced Suicide. Subtrope of Dark and Troubled Past and Cynicism Catalyst. Often overlaps with Shrinking Violet and Apologises a Lot.