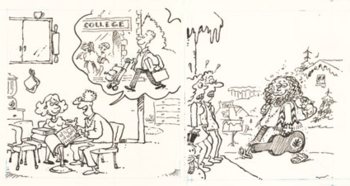 "[The stereotype is] that people here just smoke pot and talk about Buddhism, but I'm pretty positive I haven't had one conversation about Buddhism."
— The Insider's Guide to the Colleges regarding the Evergreen State College
Advertisement:

A school stereotype that permits assumptions about the type of student the school will attract. Knowing the character attends a particular school implies a set of characteristics.

The schools used for this fall into the following categories:

Schools that have a stereotype of a very left-wing education.

"Shameless" is simply not enough to describe this school. It's is filled with nudists, Granola Girls demanding you go vegan, Hollywood Atheists who get furious at the mere mention of something vaguely religious and won't hesitate to tell you you're a deluded fundie who believes in an Invisible Sky Wizard Fascist who Doesn't Believe In Rationality, stoners, Straw Nihilists, angry socialists/communists/anarchists/your choice of far-left radicals spending most of their time plotting to overthrow Western civilization if they're not fighting each other on how truly leftist they are, pissed-off black nationalists and/or similarly militant minorities who really hate white students and/or minorities not their own, angry radical feminists who see sexism everywhere and will fight you (and each other) over your role in enforcing gender norms (or even not enforcing gender norms), irritating, pretentious, elitist hipsters wearing risible fashions and sneering at "the mainstream" (anything not their art, really), radical postmodernist philosophers who claim everything up to basic logic itself is but a social construct and/or systemic oppression, angry marijuana-toking nihilist anarchosocialist-communist anti-white radfeminist hipster Nudist artists. The faculty will be all of the above — just with pieces of paper saying they're better educated. And they'll probably throw nudist parties with weed.

Every third storefront will be a coffeehouse or bar stuffed to the brim with atheist nihilists Wangsting about everything, or pretentious beatniks explaining how true their incomprehensible art is. The city council is packed with people who pass truly absurd ordinances, keep out big businesses that could improve the town, and harass anyone who disagrees with the left-wing politics of the city will into leaving, just after they finish decriminalizing weed.

Real schools used to invoke this one:

Schools that have a stereotype of a very right-wing education.

A Boarding School of Horrors run by the harshest, most conservative Corrupt Church imaginable and their goons, bordering on fascism. Infested with Sinister Ministers and fundamentalists who constantly teach lies and intolerance in the classroom and will give the worst punishments to those who even think otherwise, and Moral Guardians blaming the downfall of America on the lack of Jesus and the presence of boobs on TV. The students are small-minded Bible thumpers that are scared of any technology more advanced than a radio. The teachers are ultra-capitalist economic professors who think anything vaguely leftist is "communist" and that poor people deserve to die. Most of the men are Jerk Jocks who won't pass up the opportunity to spew racist and homophobic slurs at every opportunity, and are more concerned with football/hockey/some kind of "real" sport than anything else (besides disgusting hazing rituals, physical escalations of the aforementioned slur-spewing bigotry, and getting protected by the local cops after ruining some local student's life). Most of the women are shrieking harpies who think anything above the knees is Satan's clothing and sneer at anyone who doesn't adhere to gender norms as "people playing out a fetish", accusing any vaguely liberal woman of being attention-seeking gender traitors, enabling the men to abuse women, and also running disgusting hazing rituals and terrorising people outside of their cliques like it's high school. The rest of the students are thinly-veiled neo-Nazis who blame everything on the Jews, Good Ol' Boys hoping to go into the government for tax breaks and kickbacks while further destroying social programs, hoping to destroy any "socialist" or "cultural marxist" threat to the Good Old Ways or to bomb them commies, and ignoramuses who think Islam is a race and every black person is from the ghetto. The faculty and students will often be incredibly racist, sexist, and/or homophobic, and anyone who doesn't fit into the herd gets beaten down — literally, in some cases. Contractual Purity is required of students and faculty alike, both on and off campus. For students, it may be literally a contractual requirement, depending on the school.

Anyone who has half a brain turns out to be a Stepford Smiler, Holier Than Thou, Ax-Crazy, or Holier-Than-Thou Ax Crazy Stepford Smilers. The city council will be packed with oppressive right-wingers who want to eject anyone who dares to suggest toning any of this down. Being a historic university, its founding charter frequently comes with a long and detailed list of complex bylaws and regulations which just seem tailor-made for the Dean to abuse our plucky heroes. Whatever police or deans are there will often cover up for anyone committing heinous deeds - especially if it's the (very male) college sports team.

Note that the two former examples are generic higher education institutions which give academic education but do not prepare for any profession. There may be a third example of an academy, which would prepare for academic professions, especially engineering:

If you want to Take a Third Option by combining the left-wing and right-wing flavors under one roof.

A shamelessly intellectually elitist Ivy League for Everyone which is just as shamelessly Hard on Soft Science. This academy concentrates on hard natural sciences as well as engineering and industrial management, with possible faculties of economy, business and law. Expect a lot of tech-savvy Nerds and Geeks, including sizable Asian (from both East and South Asia) and Jewish contingents. These guys certainly won't think Everybody Hates Mathematics or Science Is Useless. Expect a lot of Hollywood Atheist and Straw Nihilist types, often overlapping with Mad Scientist. If the academy has a faculty for law, the Amoral Attorney is omnipresent. The teaching staff will include the Absent-Minded Professor with Einstein Hair, Mad Scientist professors aiming for Nobel prizes, Engineers who absolutely despise anyone not them (and show their displeasure by pulling complicated MIT-style pranks on their less-than-enlightened fellows, either non-hard science majors or unfortunate students from Berserkeley and Jim Jonestown) and the occasional Omnidisciplinary Scientist. Everyone will wear a Labcoat of Science and Medicine. Libertarian right-wing politics will predominate, but not religion, as everyone will claim to have Outgrown Such Silly Superstitions and assert that Belief Makes You Stupid. If the university has a faculty of Economics, expect it to be horribly elitist and ultra-industrialist right wing.

The alumni will look frowningly downwards both the Berserkeley and St. Jim Jonestown Academy, considering themselves both morally and intellectually superior to them. Needless to say, the Berserkeley will loathe them as elitist techbro pricks destroying the environment and lower-class and St. Jim Jonestown as amoral Commie Nazi Progressive nerds. Especially the Berserkeley alumni will consider anyone graduating here having a Morally Ambiguous Doctorate. Expect many of the alumni being Corrupt Corporate Executive and Amoral Attorney types.

Life outside studies consists of getting intoxicated and performing hacks and pranks. And, of course, MacGyvering things. Every other dorm looks like a complex maze of adjoined Hacker Caves built over miles upon miles of underground steam tunnels to play D&D in. Expect a lot of science, astronomy and chemistry geeks, Playful Hackers, otaku and LARP fanatics. Everyone will be male and single, save perhaps for the occasional Tech Bro the rest of them worship as a heroic figure (and who's still male anyway).

When you want to ridicule the elitism of academia without going particularly far to either end of political spectrum.

Like Sokal, a shamelessly elitist Ivy League for Everyone, but unlike Sokal without the shameless focus on hard science. It does, however, has a shameless focus on social elitism; how intellectual it actually is, is less important. In fact, what it does is not as important as what it is: a stately, centuries-old school that will never let you forget the weight of its history. Ever. The buildings and interiors are all of well-worn stone and polished hard wood, possibly built in some sort of Gothic Revival architecture (or simply Gothic), there might be marble statues standing around, and the school might actually put the "tower" back in "ivory tower". Expect everyone on the premises to be some flavour of White Anglo-Saxon Protestant (or its local equivalent), with just enough minority figures to fend off accusations of overt favouritism, and predominantly male. Jewish and Nerdy is just enough on the posh side to register as minority while not looking too out of place. If a specific faculty is mentioned, it's probably going to be Literature, History, Classical Studies or some other discipline that carries the connotations of "old" and "posh" — Law and Mathematics being among the more practical to still check out — and there might actually be a Theology faculty as a leftover of the school's ancient past. The teaching staff will include many an Absent-Minded Professor, who unlike in Sokal, will probably spend more time eating lavish dinners with other members of the faculty than doing science, supplemented with a Dean Bitterman enforcing the school's centuries-old rules in the name of Tradition, a Scary Librarian standing guard over the school's spooky old library, and an occasional Robin Williams lookalike encouraging his students to read old literature. Traditional gowns and headgear might actually be used as everyday clothing.

The typical student will be a scion of an established and wealthy family, most likely white, male, and somewhat intimidated by his parents' expectations, but also less obnoxious and hostile than an alumnus of Jim Jones (because otherwise he'd just enroll there); the bad apples tend to be Upper Class Twits and Spoiled Brats. Big Man on Campus either doubles as Uncle Pennybags, or is a Blithe Spirit who somehow managed to enroll without the benefit of access to old money or a legacy admission. Oxbridge alumni might look condescendingly at the alumni of other schools as too gauche, while in turn being seen as a bunch of clueless rich folks.

Life outside studies will probably involve belonging to an assorted Brotherhood of Funny Hats (actual secret societies and worship of owl effigies optional), reading, enjoying posh activities such as tennis or golf, or preparing to one-up the competing, equally-old and established school in a traditional annual sport event. If Wacky Fratboy Hijinx occur, think improvisational poetry slams rather than simple boozing. Hazing might happen in form of subjecting the freshmen to weird in-jokes and traditions. If there are drugs on campus, opium is posher than ganja.

Not to be confused with an upcoming Wii U title about scarecrows, or a chatspeak version of saying that a strawman is you.