Film / God's Not Dead: A Light in Darkness 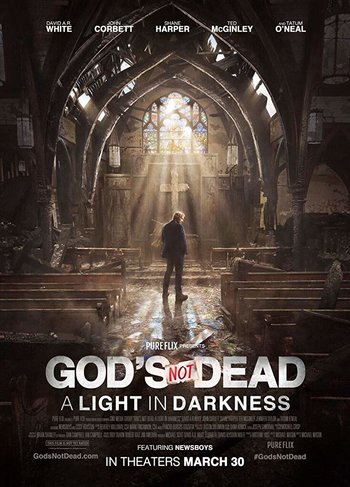 The third of the God's Not Dead series, released in March 2018.

The film takes up where God's Not Dead 2 left off, with Dave arrested for contempt of court after he refused to turn in copies of his sermons. However, he's almost immediately released since the order's ruled unconstitutional. We see that Dave's church is located on the grounds of a public university, where many students protest it. The plot then turns tragic as someone throws a brick through the window of David's church, starting a fire which kills Jude when he goes inside. After this, the university decides to use eminent domain and take the property, sending David into a legal battle. His estranged older brother Pearce, an attorney, takes up his case.

A fourth movie, God's Not Dead: We The People, was released in the fall of 2021.