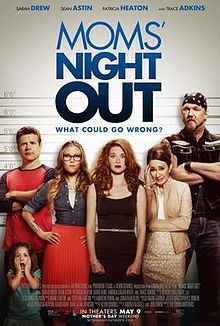 Moms' Night Out is a 2014 Christian comedy starring Sarah Drew, Sean Astin, Patricia Heaton and Trace Adkins. Allyson and Izzy are old childhood friends. Feeling frazzled in their life as mothers, they invite their pastor's wife, Sondra, also a mother, out on a girl's night out, leaving their respective husbands to watch their children while they get to relax a bit. Of course, everything goes wrong. Their reservation was set for the wrong day, Allyson's sister-in-law, Bridget, learns that her infant son, Phoenix is missing, and the dads get up to their own trouble including dislocated shoulders, dead birds, and a police chase in a minivan.

Ultimately, they learn a lesson about how they can't solve their problems all on their own, but should look for help from their friends and family.