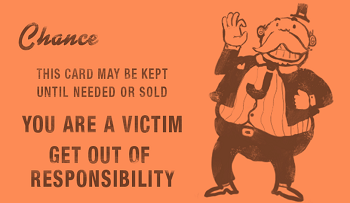 "If you always make yourself the victim, you can justify being awful."
— Heidi Turner, South Park
Advertisement:

A character has given a speech about how poor and oppressed they are, that they’re a victim of circumstance, and everybody seems to be out to get them.

The problem is that the character making all these statements is a villain.

This can be played several ways. A Jerkass Manipulative Bastard will describe a situation to make a third party think that they are an innocent victim, and the real good guys are mean and evil and out to get them for no good reason. They may legitimately believe the grievances - but the heroes can usually recognize a pity party over self-inflicted wounds. Either way, they’ll likely come across as a Dirty Coward for trying to dodge responsibility. However, sometimes the person playing the victim card is neither of those things. Instead they are an actually victimized Designated Villain.

Whether the other characters believe the crocodile tears also depends on who they are. The naive, ignorant of the current situation, will usually buy it. Characters who were there will know better. When a hoodwinked character realizes that they've been fooled, they will not be happy. Or, if it's the designated villain example, the villain will most likely be laughed at, mocked and/or be victimized again.

On the rare occasion a good guy tries to perform this action, they are usually branded as whiners because Might Makes Right.

This may take the form of a Freudian Excuse if the villain legitimately believes what they're saying—see Freudian Excuse Is No Excuse when such cases overlap with this trope. Compare What Is Evil? and Playing Sick. If the fans actually believe the villain, that’s Draco in Leather Pants.

It's also rather common for psychological abusers to combine this with the taboo of victim blaming, simultaneously discrediting their accusers and casting themselves as the real victim in the scenario. This is a common enough ploy that it has been given the Fun with Acronyms nickname DARVO

: Deny, Attack, Reverse Victim and Offender. In other words, a slightly more erudite "No, You!"

Frasier would like to remind you that he was PUNCHED in the FACE... by a man now DEAD.

Frasier would like to remind you that he was PUNCHED in the FACE... by a man now DEAD.