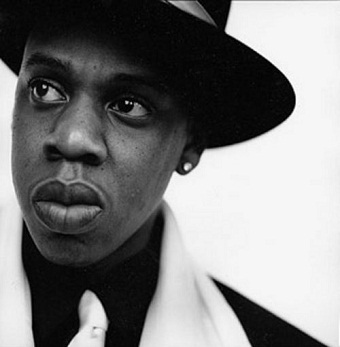 He's got 99 problems, but this page ain't one!
I'm representin' for the seat where Rosa Parks sat
where Malcolm X was shot, where Martin Luther was popped
—"The Ruler's Back"
Advertisement:

Jay-Z arose from the ashes left by Biggie Smalls' death and the subsequent battle between him and Nas. Though he isn't a Gangsta Rapper, Jay-Z has perfected the Boastful Rap, even calling himself Jay Hova. And he gets away with it. His rhymes are sharp, his beats were jazz-like, and his ego is towering.

Shawn Corey Carter was born on December 4, 1969. Originally from the Marcy Houses housing project in the Bedford-Stuyvesant neighborhood of Brooklyn in New York City, he was abandoned by his father and at 12 years old, he shot his brother in the shoulder for stealing his jewelry. Jay-Z attended Eli Whitney High School in Brooklyn, along with rapper AZ, until it was closed down. After that he attended George Westinghouse Information Technology High School in Downtown Brooklyn, which fellow rappers The Notorious B.I.G. and Busta Rhymes also attended, and Trenton Central High School in Trenton, New Jersey, but did not graduate. In his music he refers to having been involved in selling crack cocaine.

According to his mother, Gloria Carter, a young Jay-Z used to wake his siblings up at night banging out drum patterns on the kitchen table. Eventually, she bought him a boom box for his birthday, sparking his interest in music. He began freestyling, writing lyrics, and followed the music of many artists popular at the time. In his neighborhood, Carter was known as "Jazzy", a nickname that eventually developed into his stage name, "Jay-Z". The moniker is also an homage to his musical mentor, Jaz-O, as well as to the J/Z subway lines that have a stop at Marcy Avenue in Brooklyn.

Jay-Z can briefly be heard on several of Jaz-O's early recordings in the late 1980s and early 1990s, including "The Originators" and "Hawaiian Sophie". Jay-Z was also involved in and won several battles with rapper LL Cool J in the early 90's as part of a plan to get a sought-after record deal. He first became known to a wide audience by being featured on the posse cut "Show and Prove" on the 1994 Big Daddy Kane album Daddy's Home. Jay-Z has been referred to as Big Daddy Kane's hype man during this period, though Kane explains that he didn't fill the traditional hype man role, instead Jay-Z "basically made cameo appearances on stage. When I would leave the stage to go change outfits, I would bring out Jay-Z and Positive K and let them freestyle until I came back to the stage". He made an appearance on a popular song by Big L, "Da Graveyard", and on Mic Geronimo's "Time to Build", which also featured early appearances by DMX, and Ja Rule in 1995. His first official rap single was called "In my Lifetime", for which he released a music video. From the beginning of his professional recording career, when no major label gave him a record deal, Jay-Z, Damon Dash, and Kareem Biggs created Roc-A-Fella Records as their own independent label. After striking a deal with Priority to distribute his material, Jay-Z released his 1996 debut album Reasonable Doubt with beats from acclaimed producers such as DJ Premier and Super DJ Clark Kent and a notable appearance by The Notorious B.I.G. The album went on to become a hip-hop classic and helped put both Jay-Z and Roc-A-Fella Records on the proverbial map.

Married to Beyoncé. Has three children with her, as well.

"The Life and Tropes of S. Carter":