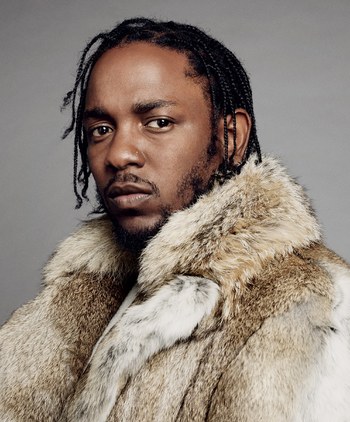 One of the great young talents in rap music, Kendrick Lamar (full name Kendrick Lamar Duckworth, born June 17, 1987) is an American rapper born and raised in Compton, California. He is known for delivering politically charged, story-driven, and often nostalgic lyrics, drawing on his experiences growing up in a bad neighborhood.

He released his first mixtape at the tender age of sixteen. Having signed to Top Dawg Entertainment, Kendrick continued to pump out acclaimed mixtapes and finally released his debut album in 2011, titled Section.80. The album won him great critical acclaim and revealed to the public the great potential the young MC had, including Dr. Dre and Snoop Dogg, who crowned him the "New King of the West Coast" at a concert.

With this recognition, Kendrick signed to both Interscope and Aftermath and in 2012 released his second full length album, good kid, m.A.A.d city, an album all about his teenage years and experiences with drugs, alcohol and gang violence. It has been highly regarded as one of the best albums of 2012 and caused mass controversy when it lost all of its Grammy Award nominations and some of the awards went to Macklemore (who even admitted that Kendrick should've won).

In August of 2013, Kendrick featured on the Big Sean song "Control". His verse, in which he managed to call out the entirety of the rap game's current artists while simultaneously claiming that he is the best in the game and urging the others to catch up, was widely considered to be the year's best display of raw lyricism. Kendrick's verse is so popular, that some are surprised to learn that there are two other artists on the song. That verse can be heard here.

On March 15, 2015, Kendrick's third full length album, To Pimp a Butterfly was unexpectedly released (due to an error on Interscope Records' behalf which caused the album to be released a week earlier than scheduled) to widespread critical acclaim. Similarly to GKMC, the album was infamously snubbed for an Album of the Year Grammy that went to Taylor Swift, although it did win a number of other Grammys. A compilation of demos that were created during the production of TPAB was eventually released in March 2016 under the name untitled unmastered.

Kendrick began hinting towards a fourth album on March 22, 2017, where he deleted all of his pictures on Instagram and uploaded a since-deleted picture with nothing but the word "IV". The following day, "The Heart Part IV" was released as a promotional single, signaling an upcoming return of Kendrick, supposedly taking shots at Big Sean and Drake, and hinting the date of his fourth album with the line "Y'all got April the 7th to get your shit together."

A week later, the album's lead single, "HUMBLE.", was released ahead of schedule due to the cover art being leaked online. On the announced date of April 7, 2017, the new album was not released but merely made available for pre-order, to the dismay of fans. On April 14, 2017, Kendrick's fourth studio album, DAMN. was released to widespread critical acclaim, beating out Drake's More Life for best selling hip-hop album of the year with 600,000 units sold. On April 17, 2018, DAMN. also became the first non-classical or jazz album to win the Pulitzer Prize for Music.

After a performance at Coachella, Lamar finally announced he would be releasing his long awaited fifth album in 2022, with him teasing the album in the beginning of May with the name Mr. Morale & the Big Steppers, with the album dropping on May 12th, 2022. It will also be the last record with Top Dawg Entertainment and the first of Kendrick's label pgLang.