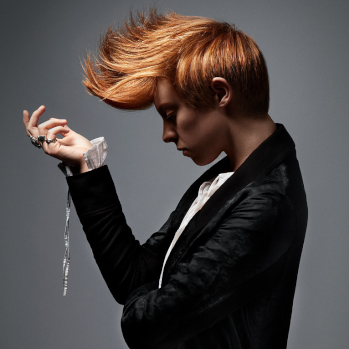 La Roux (originally Elly Jackson and Ben Langmaid, the former doing the singing) are a British group who were very much "Best Newcomer" circa 2009, though it took them until 2014 to finally follow through with a second LP, by which time Langmaid was out of the picture.

Their style is best described as electro-pop. Four of the tracks from their first Self-Titled Album have been released as singles:

The second album, Trouble In Paradise, was released in July 2014. Later in 2020, they released their third album, "Supervision" in February 7.

Not to be confused with Le Roux, a country-rock band from the '70s (sometimes referred to as Louisiana's Le Roux).