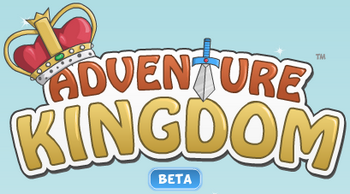 Adventure Kingdom is a online 2D Flash RPG made by Seirie and Plixik (of Kongregate).

Adventure Kingdom is a rather strange fantasy RPG. Like the usual bunch, you have the ability to explore a vast array of colorful locations whilst battling quite odd enemies and bosses. In this case, odd meaning almost anything goes as well as not being part of the era. On your adventure, you'll be able to choose and upgrade from an arsenal of physical and magic abilities. Collect weapons, armor, and clothing to customize and increase your character's chances of survival in this world. But remember to apply your battle strategies well otherwise, this game may rip you a new one.

The game's story begins with you almost completing your training at the Castle Grounds. The only thing left to do is to defeat the head trainer, Master Batori. But, before you can do so, you must take care of the appearance of strange attacking monsters in the training grounds. Off you go with your Old Bamboo Stick into your first adventure...