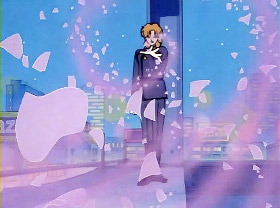 Roses Are Red, Violets Are Blue...,
Petals are pretty, and deadly too.
"Fighting off monsters with a bouquet of flowers? How romantic."
— Megara, Kingdom Hearts II
Advertisement:

When a character has super powers (especially the glowy variety), artists will want to personalize them. After all, seeing twenty lime green Battle Auras would make viewers think they're watching a rave, not a Martial Arts and Crafts Cooking Duel. And so it goes that most Ki Manipulation, Deflector Shields, Glowing Eyes of Doom, and sundry visual effects are Color Coded to the character.

Well, some are a tad more original when they personalize their offensive repertoire. They use... flower petals! That's right, this character attacks enemies by spontaneously creating a swarm of lovely flower petals. These petals aren't harmless though, they're usually either razor sharp or explosive, accompanied by a gale force wind, deadly poison, or a powerful barrier. Or all of the above, in order to annihilate a foe with a deadly display of beauty.

The petals can be from any flower, but commonly, it's rose petals, peach blossoms, or Cherry Blossoms (these are a big favorite in Anime). Leaves aren't out of the question either, though using vine whips is not this trope. The attack itself may or may not actually be made of petals; it could just be a fancy visual aid that disintegrates post attack.note Which makes you wonder at all the spare energy and work that must have gone into making a generic energy attack look like the picture on the top right. That said, most instances of this trope come with flower based names and they actually do evoke power over plants in some form.

Sub-Trope of Single Substance Manipulation. Not to be confused with Flower Power. Users are prone to wear Garden Garments.

Each member of Organization XIII wields power over a specific element (be it classical or esoteric). Marluxia wields the power of flower.

Each member of Organization XIII wields power over a specific element (be it classical or esoteric). Marluxia wields the power of flower.