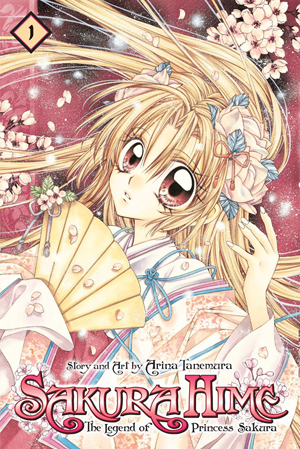 Sakura Hime: The Legend of Princess Sakura (Japanese title: Sakura Hime Kaden, literally "The Legend of Princess Sakura"), is a historical fantasy shojo manga written and illustrated by Arina Tanemura. It was serialized in the comic magazine Ribon from 2008 to 2012 and was published in 12 volumes. Throughout its run, a vomic (voiceover comic) and exclusive artbook was released.

The manga tells the story of 14-year-old Sakura, the princess of the moon who is betrothed to the imperial prince of the kingdom, Aoba. Sakura, however, is a descendant of Kaguya-hime (from The Tale of the Bamboo Cutter) and the wielder of the sacred blade Chizakura (Bloody Cherry Blossom), giving her the power to vanquish demons. Unfortunately, her destiny written in her soul symbol and appearance lead the reigning emperor Oura into believing she is a threat to humans.